Reskilling: training at the time of the fourth industrial revolution

Today and, increasingly, in the near future the watchword in the world of work is professional retraining.

We have already spoken in this article as the fourth industrial revolution, linked to Industry 4.0, to the growth of Internet of Things (IoT), the affirmation of Artificial Intelligence and the introduction of advanced automation, will lead to a revolution also in terms of professional skills.

If by the term skilling we intend to indicate a training process to work from scratch, typically implemented in order to train young people to a specific profession, the term reskilling defines the process of learning new skills, indispensable for putting a professional already started in the conditions of being able to perform a job different from the one currently or previously performed.

In the next ten years, 375 million people, equal to around 14% of the globally active population, could have the need to change jobs, due to the impact that digitalization, automation and progress of artificial intelligence are already having today in the productive and service sectors.

The fourth industrial revolution is the central theme of the last annual meeting of the World economic forum. The era of artificial intelligence, augmented reality, 3D printing, autonomous vehicles and the Internet of things is both a promise and a risk: the opportunity to increase well-being and improve the quality of life is outlined: the health of the environment and of people, but also the fear of aggravating economic disparities, political and social tensions, the exclusion of those who do not have the right skills.

Precisely for these reasons, some experience innovation brought by new technologies as a threat to their working life, as it brings with it a great potential for disruption. In fact, only about 5% of occupations today could be completely automated with the available technologies. Many jobs, in fact, involve tasks that can only be partially automated or others completely non-automatable.

In a 2018 study (" The future of jobs 2018") the World Economic Forum calculated that 75 million people could lose their jobs, but there is also the opportunity to create up to 133 million new jobs. Skills remain the central issue: new skills are needed to prevent the fourth industrial revolution from generating harmful effects on employment.

Opportunities and costs of automation and digitization

Skilling and reskilling therefore represent a fundamental problem for the development of today's economy, especially in our country: if it is true that automation and artificial intelligence can accelerate growth, it is equally clear that, lacking the skills, we will not succeed in take advantage of this opportunity.
In fact, it is estimated that, at the global economy level, the increase in productivity generated by automation will lead to growth of between 0.8% and 1.4%. The process of adjusting the necessary skills, however, will be expensive: the estimate expected by the World Economic Forum for this great educational revolution is, in the USA alone, of over 34 billion dollars.

In countries where the population is older (such as Italy, Japan and Germany) the redevelopment work will be more impressive. According to OECD data, Italy is in the last places both for senior employment - that is from 50 to 64 years - and for youth employment, that is from 15 to 24 years; these data confirm the need to urgently train older workers on emerging technologies and prepare young people for new professions.

What will the new skills be?

In recent years various professional figures have already emerged that were practically non-existent in the past. These data are, still today, still fragmentary, also because the phenomenon is in constant evolution. To get a more precise idea, we report the results of some papers.

In 2014, LinkedIn obtained (from the over 259 million profiles of that year) as many as 10 completely unpublished title jobs up to 5 years before.
Basically, they were figures belonging to the hi-tech sector such as IOS and Android developers, data scientists, UI / UX designers, big data architects, cloud services specialists, as well as digital marketing specialists and social media experts.

In 2015, the report of the World Economic Forum, in which the categories of workers are estimated for which the demand will decrease or increase between 2015 and 2020. Among the professions most in demand, the employees in the Business and Financial Operations sector, followed by the Management experts, IT and Mathematical Sciences. In the fourth place the category Architecture and Engineering, followed by sales and training. On the other hand, the number of administrative staff has fallen, followed by those involved in manufacturing and production, evidently overwhelmed by the disruption caused by Industry 4.0. The demand for construction workers and extractions is also declining, also being replaced, at least in part, by robotics. The contraction is also reported for those employed in the art, design, media, sport and legal sectors, followed by the one concerning installation and maintenance. 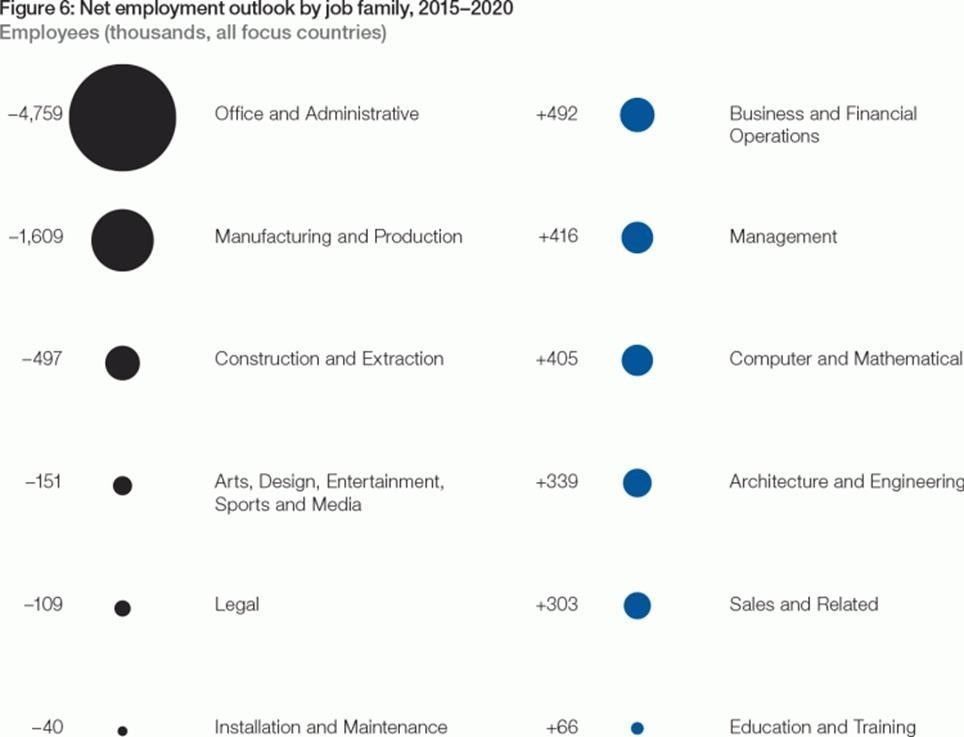 The European Commission has also indicated eight skills (mainly digital) that will be needed in the future to increase the possibility of finding work. In addition to the knowledge of a foreign language, the ability to apply new technologies to human needs and computer skills, the ability to learn stands out, as does the ability to participate effectively and constructively in social and working life. An evolutionary process that often puts the over 50 in difficulty, especially the less flexible ones.

How can companies prepare for reskilling?

1. Hire those who have the ability to "learn to learn"

As mentioned earlier, we do not yet know what the professional profiles of tomorrow will be and, in any case, finding all the profiles among the new graduates is impossible, as well as counter-productive. Consequently, it is convenient to hire staff not only because of consolidated professional knowledge, but also considering individual learning ability.

In order to really prepare young people for the world of work, companies and training institutions must work closely together. It is necessary to explain to young people how to become cyber security experts, blockchain experts and data scientists, for example. And many companies, especially the US, know this well. According to the Economist, there are about seventy companies, including Microsoft and Verizon, that are working with schools to be able to find, in the immediate future, technology-savvy employees who are suited to the new tasks required.

Virtually everyone, even those over 50, are now aware of the relevance of digital skills in the workplace. However, today around 40% of the workforce in Europe does not have a digital education. The European Union has estimated that by 2020 there will be 900,000 job vacancies due to this shortage. In this delicate transition phase, a valid tool can be reverse mentoring: young people, who already have a digital culture, are given the task of evangelizing company seniors. In turn, the seniors will teach the company know-how and culture to the juniors. An equal exchange, win-win.

Some examples of farsighted companies

Many temporary agencies are moving in the direction of skills qualification and re-qualification. Adecco, for example, has launched Phyd, a platform that uses AI tools to help improve the orientation of those involved in their professional updating, or in reskilling, or who must direct their personal path in the world of work.

In the United States, an interesting example is that of Walmart, which launched the Walmart Academy Program to train workers in areas of greatest demand. In just two years, over 270,000 people have been trained.

In London, Lloyd Bank Group, in the financial services sector (a sector with a very high technological impact), has invested over 3 billion pounds over three years to digitize its processes, simultaneously forecasting the supply of over 4.4 million hours of free training for their employees, in order to prepare them for the new professional reality that they will face at the end of the three years.

In Italy, Microsoft has launched the Ambizione Italia project with the aim of involving more than 2 million people and providing new skills to over 500,000 students and professionals by 2020.

IBM has instead implemented the Career Transition Center, a service that offers training programs aimed at reskilling to professionally reposition itself inside and outside the company.