How to use e-Learning in schools: the case of Sugata Mitra 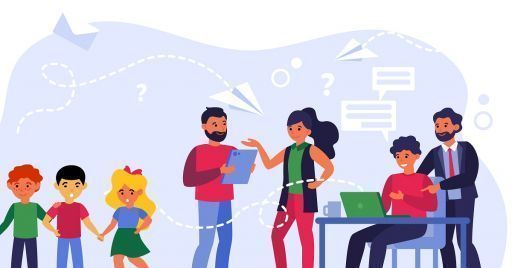 Sugata Mitra is a retired computer scientist and educational theorist who is considered one of the leading experts on online education to which he has devoted much of his career. He achieved international fame when, in the late 1990s, he installed a computer with an internet connection in a wall near a slum in Delhi. His goal was to see how children who had never seen a computer learned to use it and for what purpose. Before long, the computer began to be used by many children to learn all sorts of things. This story, which became known as "The hole in the wall", became very famous and inspired famous novels and movies, as well as many other similar experiments. Despite its popularity, no government has ever shown particular interest in its research. Not even after several teachers and institutes have put his methods into practice and obtained remarkable results. Academia also shows no particular enthusiasm in his research and is quite critical of his studies.
In this article we explore the story of Sugata Mitra, to understand what is the learning method that is the result of his research, which is one of the longest in the field of the use of the Internet for training.

Who is Sugata Mitra?

Mitra is the only son of a well-to-do middle-class family in Calcutta, India. He soon moved to Delhi where he attended Jesuit schools. He earns a bachelor's degree and a doctorate in physics and from his undergraduate years begins a series of publications on physics in scientific journals. In Delhi he starts working as a computer programmer for a multinational company offering computer education packages. Soon he was moved to teach other people how to program and it was during this period that he got the idea to install a computer in a wall in Delhi to see how children and young people used it. The success of this story led to the replication of the experiment in several cities in India, however today all the stations where the computers were installed are inactive.

When Mitra became a professor of educational technology at Newcastle University in the United Kingdom, he had the opportunity to expand his research and implement it in contexts other than India. He therefore started the SOLE project, which stands for self-organizing learning environment. This experiment is similar to the one in which he installed a computer in a wall in Delhi, but this time the computer is installed inside a building, usually a school, and also involves the presence of educators.

The children are then left free to use the computers to search for answers. There are usually four computers for twenty students in the rooms to encourage group work. In fact, in several interviews, Professor Mitra emphasized that during this phase there should be chaos, noise, and discussion in the rooms. This indicates that the children are interacting, exchanging advice and testing them, absorbing information and at the same time learning to confront each other. In this context, the role of teachers is to encourage, prompt and then have a discussion session with the children.

One of the most surprising results of the program is that children are smarter than they think. Putting provocative and engaging questions to kids and letting them come up with the answers themselves turns out to have very positive effects. In order to answer the same questions, students self-direct themselves into areas of their interest that are sometimes different, sometimes the same. The point is that they strive to understand information that might seem too difficult in other contexts.

Mitra was initially successful in convincing forty schools in the northeastern United Kingdom to use SOLE. According to his own words in an interview with the Guardian newspaper, news of the start of the experiment went viral. He also stated that he doesn't know exactly how many schools in the world use his method but that a lot of teachers send him very positive reviews. In addition, in 2013, Mitra managed to win a million dollars for a speech he gave at a TEDx conference about his research and used the prize to establish seven SOLEs, five in India and two in disadvantaged areas in the UK.
Today, the SOLE project has become something of a movement, with many individuals, institutes, and schools independently starting to offer this model of teaching kids. Online you can access several sites of SOLE projects around the world initiated by institutions, individual teachers, or communities.

The limitations and criticisms of the research

There are two problems associated with the research: the limitations of the studies and the criticisms for the method.

● Limits of the studies
The main criticism of Professor Mitra is the lack of extensive academic studies of this method. Since there have not been many controlled experiments that have allowed for the acquisition of sufficient scientifically valid data, it is nearly impossible to publish the results in reputable academic journals. The most cited article regarding the scientific results of the model offered in SOLE written by Mitra and an elementary school teacher was in fact published in a little known journal. The article presents results that are nothing short of astonishing. A group of 8- to 9-year-olds were given a test on complex biology and physics questions, and after 45 minutes of using the SOLE method their average scores on a set of three questions were 25% 26% and 13%. Three months later, during which time the school did not teach courses in these subjects, the boys were tested unannounced individually. Scores on the same questions this time rose to 57%, 80%, and 16% indicating that the boys continued to seek information on these questions during their free time.
Despite the excellent results, in responding to criticism, the authors themselves acknowledged that the number of participants in the experiments is small and that new experiments with more rigorous analysis and detection are needed to draw valid conclusions from these experiments.

● Criticism for the method
In an interview with the British newspaper the Guardian, the professor argues that his method is to get children's self-confidence to rise to the point where it challenges adult perceptions. Although he believes that this is a key aspect of children's education, he laments that many see this as a negative because it leads children to be undisciplined.

What can we learn from Professor Mitra's story?

The fact that SUN creates intellectual stimulation that encourages kids to achieve goals we didn't think possible is very reasonable and plausible. So is the fact that kids benefit from collaborative learning and that banning internet use during exams is not only increasingly difficult, but probably unnecessary. It takes time to figure out how technologies can be useful, and part of that process happens in unexpected ways. Professor Mitra has good and reasonable ideas, and seems to argue that we should transform the learning experience in schools. The premises of his research are encouraging, but more data are needed to convince a broader audience.

Despite this, there are other indicators that suggest Professor Mitra may be right, especially looking at the current global situation. The education technology market is constantly growing and there is talk of many new technological solutions for learning such as virtual reality to provide immersive experiences or artificial intelligence to personalize the method of study. In addition, the experience of the pandemic has shown the world the usefulness, and perhaps the necessity, of integrating technology more into the world of education.

The idea of this professor comes from the awareness that the internet and new technologies are radically changing the world we live in. At this point in history we are seeing the application of technology and the internet in every area. In some sectors we are at an advanced stage, such as medicine where it would be unthinkable to give up the use of machinery and tools. Other areas, such as education, have been left out and the integration of new technologies is in its infancy. However, to think that technology will not become even more entrenched in the world of education and training is a false hope. Like any other field, education will see an increasing application of technology.
From this realization, Professor Mitra's research has focused on figuring out how we can manage this change and providing a method. This professor's idea is that computers can be used as wells from which kids can draw any form of information. As a result, teachers should no longer be handing out information, a role that will be filled by technology, but focus on providing the tools on how to use this information to answer complex questions and create new opinions.
We should wait some more time to see if the professor's idea will become reality, especially since his research doesn't provide enough data. But in the meantime, inquiring about the results of his research and understanding the motivation for his ideas and proposals can be an initial point to start discussing a topic that, before long, will involve us directly.